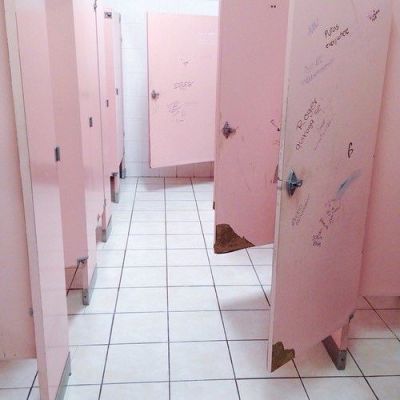 Maybe it’s because I turned the grand old age of 27 yesterday, or maybe it’s because 2016 has brought about the most growing up I have EVER done. I’m ENGAGED for God’s sake. I just can’t stop thinking about how much can happen in a decade.

This has got to be the most distanced I have ever felt from my teenage self. Particularly me at 16, who thought she was really cool and knew everything, but who had never experienced much of anything and had the world’s worst hair cut. There are so many things I wish I’d known then, but am secretly quite glad I didn’t because the journey is hilarious, moving and valuable to look back on. I have learned so much it’s actually quite disturbing. I feel like a completely different person, in the best way imaginable.

So I guess this message is for anyone – 16 or not – who’s struggling to picture themselves in the future. There’s a good chance that in 10 years time you will be completely unrecognisable and sometimes this is a blessing. Do not be afraid to change as you age. Learn from every experience and it will shape you into something more resilient, understanding and wise. As a 27-year old, I empathise more with everyone I knew at school whose parents were divorced. It’s hard to take as an adult, and must have been impossible to digest as a child. You were going through something traumatic. Tremendous upheaval. I get it now. The saddest things help us to reconnect in some indirect way eventually.

All I know is that I can look back and smile at 16-year-old me, but I no longer know her well enough for a tearful embrace. We are different, we are grown apart and we are much happier that way; existing not as each other’s shadow but as something amicably separated. The past, after all, is a separate entity to the present and the future is a complete and utter stranger. So here’s some advice from one stranger to another. Here’s 10 lessons to 16-year-old me.

Sometimes first love lasts forever, and sometimes you find something much, much better. You’ll think of him/her, sure. That’s ok, but mostly you’ll learn how it feels to have your heart broken and you’ll become a better person for it. At 16 I fell in love, at 17 I thought love was mostly about playing games, at 20 I was cheated on, at 22 I learned the hard way never to date a friend. Then I found him. And I realised it was all just building up to meeting that person. It was worth every horrible breakup. Happiness rarely lies in settling for a relationship filled with secrets and doubts. Give things time to unfold before you give up on finding love.

2. Think carefully about your career

Although I love my job, I still wish I’d thought about my career options a lot more carefully at school. I knew I wanted to write but I didn’t know how that translated to an actual career if you weren’t, like, an author. I didn’t know what a copywriter was or how much it paid. I knew nothing about marketing, sales, SEO, or CRM. They literally don’t teach you the things you could really do with knowing. I thought ‘I’ll be a fashion journalist’, and then got sick of working for free in the hope that it might pay off eventually.

3. Use the Internet for something other than videos of cats

Dear all 16 year olds of today, I know that careers advice is still incredibly shit 10 years down the line but you do have this wonderful thing called WiFi. Believe it or not, we still had dial up Internet when I was 16, and that meant not being able to use the Internet and the home phone at the same time. I mostly chose the phone. Or MSN messenger. And back then mobile phones were literally just mobile phones. With no 3G or Wifi. Ever. Whaaaat? Crazy I know. Take full advantage of your nifty information-filled phones – the choices you make now really do affect the rest of your life.

4. Stop comparing yourself to other people

At 16 I was obsessed with labelling myself as something, probably because I had no idea what category I was supposed to fit into. I felt like I knew who I was at school, but then I went to Uni and I wasn’t top of the class or well known anymore. I was average. Competing to stand out at Uni when you come from a small town and a shit school, and even harder when you eventually try make it as a writer in London. My advice? Don’t rush your identity. It forms with experience, the people you meet, the places you visit, the books you read, the films you watch, the shit stuff life throws at you. Be interested in things and fight for your cause. Your signature look and persona will materialise eventually.

5. Be kind to yourself, and to others

Don’t compare yourself to charismatic extroverts when you’re the opposite, don’t force yourself to wear clothes you’ve copied from someone else, stop thinking everyone is prettier, cooler and cleverer than you. And equally, never assume you’re better than someone. Sometimes you might be, but mostly you’re not. There will always be someone out there who is much better at something than you. It’s called competition. It makes you want to be better. Don’t be too hard on yourself, and when you’re struggling, don’t be too proud to learn from other people.

At School and Uni, I genuinely thought that if I was just a bit thinner, with clearer skin and better clothes I would be happy, like, forever. Obviously these things can make us feel more confident, but they’re so superficial we take them for granted almost instantly, and that longing can only be replaced by something else depending entirely on your own vanity to work. It’s a bad circle to get stuck in. As you get older, you really do discover what makes you happy, like hearing live music with friends, elaborate family meals, sunsets in exotic places, recognition for working hard, cuddling up in bed when it’s raining, finishing a great book, the love from your pets, or just a plain old cup of tea in your favouritemug. These wonderful, familiar things are what we must cling to in our darkest moments, not perfect hair or pristine teeth.

7. Don’t long for a life of sunshine and rainbows

I grew out of puppy fat, acne and terrible hairstyles but my happiness didn’t blossom in the same way. It became far more complicated than I ever would have imagined. And that’s just how is it. I was a very fortunate teenager, and not at all equipped for some of the things life would throw my way some 10 years later, but I know from the bottom of my heart that prettier/skinnier whatever does not make you happier. If that was all you had, all any of us had, the world would be an awful, boring place. Treasure your friends, work hard, say yes to opportunities, support your family, and be grateful for what you have. That is where true happiness lies.

8. Look after your body

I’m still learning how to implement this long-term because I love a party but nothing makes me want to vomit more than the thought of how I drank at uni. Drinking all the time is part of uni culture and hilarious to some extent, but it also makes you lazy, forgetful, overweight, tired and depressed. Lying in bed hungoverall day is not making the most of some of your best years. Your free-to-do-what-you-want years. Try to strike a balance. It really doesn’t hurt. You will look back and wish you tried harder. Believe me.

First off all, it’s lovely when you stay BFFs with everyone from school, but sometimes it doesn’t work out. You won’t believe me now, but in 10 years time you might have a completely different friendship group. You might have gone to uni away from home, moved to a new town, travelled, partied, put yourself out there in various shapes or forms, and eventually found yourself with a whole bunch of new mates. Somewhere along the line, you will work out who your true friends are. Here’s a hint: staying in touch with them and seeing them regularly isn’t something you have to factor in, it’s just part of your life. Friendship should be completely effortless, but at the same time you’ll both want to make the effort.

When I started a new job once, I was asked to state an interesting fact about myself. Although most of the things I wanted to blurt out were highly inappropriate at the time, I was privately happy to recall so many silly, funny stories. It’s true what they say, your best memories aren’t going to start with a salad an an early night. Take chances, party and say yes to things, just be smart about it. You’re only 16 once, after all.