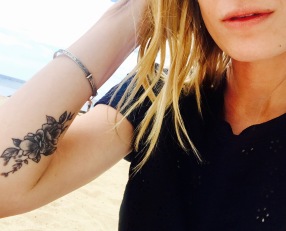 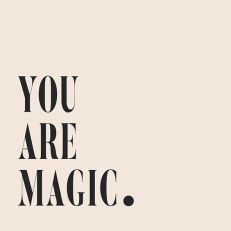 Don’t get me wrong. Getting a tattoo is a big deal and requires some serious thinking.

God, I debated my first tattoo for about five years. And to be honest, I’m so glad I waited for that one. But getting a tattoo is also hugely liberating, particularly if you’re obsessed with looking ‘perfect’ all the time.

I think as you reach your mid-twenties, your personal style and sense of self kind of settle down and find a fixed shape. If any tattoo resembled my pre-2010 dress sense then fuck knows what I would have ended up with.

I knew I wanted a bird on my back, but I also knew I wouldn’t be able to decide the details until they sort of found their way to me (lame). I didn’t want to force it, so I waited. I also have a huge fear of making the wrong decision.

Then, one day I was in my Grandparent’s shed (why?) and came across a familiar old painting of a goldfinch. Around the same time, a colleague showed me a new tattoo artist she’d discovered on Instagram – Martha Smith – who specialised in nature. It was a match made in heaven and I still adore my goldfinch tattoo today. Not only does it represent patience and ‘waiting for the right thing’, it gives me faith that I know and feel what’s right for me when I see it.

You see, when you have OCD and easily become obsessed with bizarre notions of perfection, trusting your gut instinct can be tricky. Basically, your gut is punctuated with little jabs of OCD-induced thoughts that try and disrupt those all important signals. “This feels right” is often masked with “What if I’m wrong?” and thoughts of worry get in the way. It’s really bloody annoying, actually.

In many ways, getting a tattoo when you have OCD is like giving your inner control freak and perfectionist the finger. I realised half-way through the one-hour ordeal that even if something went wrong I already didn’t care – I was so high on liberation (and pain) that for almost 30 minutes I relinquished control and gave myself up to a total stranger.

So, when I got in touch with Martha again a year later, I didn’t give her an image to copy. I simply wrote to her that I’d like something to represent change.

I didn’t tell her that my Grandad had passed away while I was in Japan, or that I wrote him a letter about cherry blossom’s temporary beauty, one that was read to him on his deathbed, or that he smiled at the letter when he could no longer really talk, or that my Nan still has that letter stuck to her fridge, over two years later.

I didn’t tell Martha that the reason I wanted something to represent change was because over the last two years I’ve experienced more change than I thought I would in a lifetime (long story).

When she sent me her drawing, I knew it was perfect.

“I love it – what flowers are they out of interest?”

I debated getting it somewhere discreet, like my foot, but I knew deep down I wanted it on my arm. A reminder that change can be beautiful when you’re awarded opportunities to connect with greater, deeper things. And that it is you, and you only, who tells yourself what perfection means.

Getting a tattoo can be a big step in reclaiming your sense of self. A sort of feeling in control by consciously letting go of control. And when Martha began tattooing my arm, she told me to imagine that any pain and hurt I had felt was going into the pain of the tattoo, and that at the end of it all, I would be pain free. And in many ways, she was right.

I actually ended up getting another, tiny tattoo that day and surprised myself with the spontaneity of it. The alchemical symbol for air  – a triangle with a line through it.

I know how this sounds, believe me, but during a yoga retreat in Spain, my yoga teacher told me I was Air. I looked at her, confused. I always thought I was Earth, but sometimes you see yourself through another’s eyes and realise maybe you labelled yourself wrong. Sometimes the things you tell yourself aren’t necessarily true. Sometimes opening up to a new version of yourself will free you from past limitations around who you were and align you with who you’re destined to become. Earth and Air signs are the inverse of each other, so really I have a tattoo of both, depending on how you look at it. Which, to me, is kind of magical. 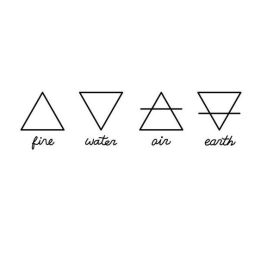 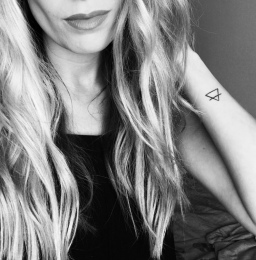