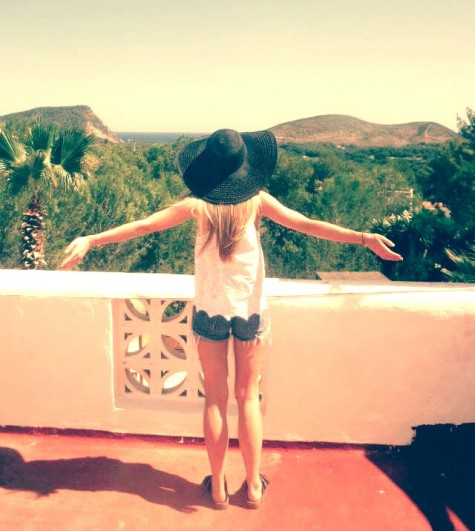 Pretty much my entire summer this year has been building up to one thing: 6 days in Ibiza with 11 friends. A part of me thought that maybe this time (my third time) at the ripe old age of 25, I wouldn’t go too mad. I thought staying in a beautiful villa in the mountains of Roca Llisa, miles away from the non-stop party at Playa d’en Bossa, would be enough to discourage me from going out every night. I was wrong, of course. I didn’t stay in once.

Am I regretting it now? Yes and no. I feel ill. Very ill. My poor sleep-deprived body is so very relieved to be going to bed before 6am. But at the same time, I’m so glad I reserved a precious week of my year to be plain ridiculous. I have a tendency to take myself and everything else too seriously, constantly worrying about the tiniest things. After five minutes with my friends, sitting around our pool, drinking Malibu (of all things) with boiling water at 10am because ‘it’s pretty much the same as Moroccan tea’, I’m laughing too much for anything else to matter. A week away from your day-to-day life has a wonderful way of making you realise what’s important. The non-stop partying was kind of just an accidental product of us being so happy to be there. We literally celebrated the entire time.

It’s a common misconception that most ‘party animals’ are that way inclined because they crave escapism. People often assume that going out-out is a welcome distraction from the hardships and monotony of life. In lots of ways it is, but for us, it really isn’t. I feel so lucky to be part of a group of friends that experience all the amazing things about a night out together, and none of the shit. No fights, no puking in the cab, no crying, no bullying each other into coming out, no kissing people you shouldn’t, no waking up with regrets. Sure, that’s what a night out used to look like for most of us, but after years of experience, I think we’ve finally cracked it. Most importantly, we just love music. We love each other’s tastes in music and none of us are shy on the dance floor. We even have our own dance moves. A look or a hand-signal across the dance floor has us in hysterics. We never drink to forget. Quite the opposite in fact – we’ve made hundreds of hilarious memories.

For our first night in Ibiza, we were unashamedly the first people in Pacha, dancing solidly to Amine Edge & Dance and MK until it closed. It was the PERFECT first night – and a massive thank you to Ben, who got us all in for free. Saturday saw us eventually arrive at Sankeys for Magna Carter and Reverse after a party in our villa, Sunday we hit Ushuaia for full-on cheese (Avicii), followed, of course, by Space for Erick Morillo, Monday at DC10 has ruined my ears for life and Chase and Status and Defected at Amnesia on Tuesday feels like a mad dream. I think we genuinely ended up spending 1000 euros on taxis. It was so worth it.

Before going away, we decided we’d throw our own party at the villa during the second day. We actually hired a sound system and each prepared a playlist, allocating set times so everyone could be DJ for an hour. At around 4pm I was standing in the ‘DJ booth’, watching everyone prance about dressed as a caveman with the BIGGEST smile on their face. Dancing on chairs, swinging each other round, cans of beer in hand, with a backdrop of palm trees, mountains and blue skies. I think it was the most carefree thing I’ve ever seen. Our whole day was spent like this (until the neighbours shut us down), and I will literally think of it every time I feel a bit low, probably for the rest of my life.

It sounds a bit OTT writing that, but it’s actually true. Plus, it’s helping me get over the guilt of sacrificing my health and sanity for a week of fun. Going a bit wild in Ibiza has weirdly put into perspective how much I really don’t need to go crazy, I just need my friends. I feel like I’ve been on some strange journey of self-discovery (probably because I still need to sleep), where I’ve gone from wanting nothing but a giant party to feeling like I never need to party that hard ever again. Like, I’ve done it. It’s out of my system. I guess taking things to the extreme always leaves you craving the opposite. I’m lucky that when I eat too much sugar, I start craving vegetables, not more sugar. And funnily enough, in the week I’ve been back I’ve started getting my wisdom teeth. Two of the the bloody things. I think it’s a sign. I’m ending on a high. I’m actually growing up.

Until I see this bunch again anyway. 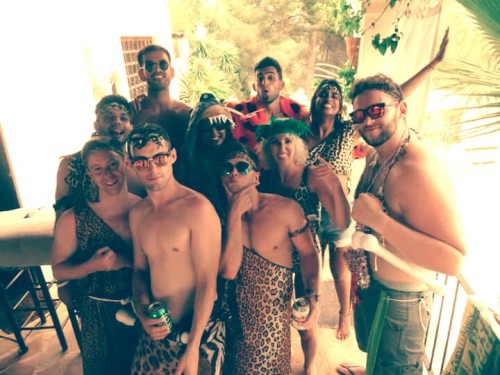